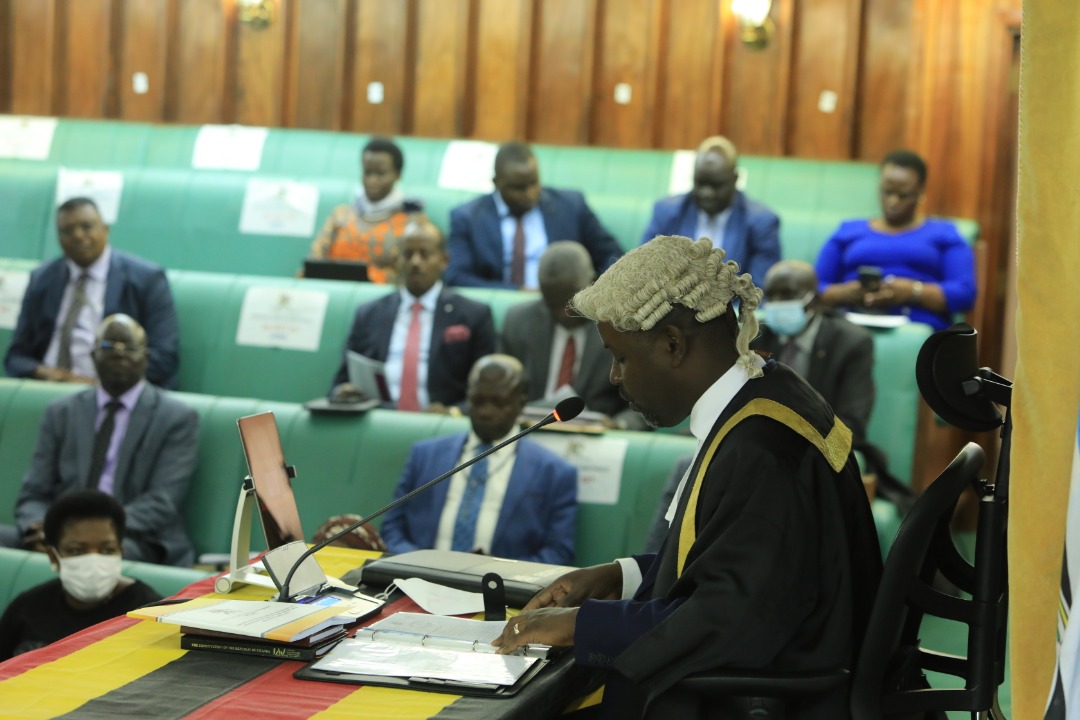 Today marked the 13th Sitting of the 2nd Meeting of the 2nd Session of the 11th Parliament. Today’s Sitting was presided over by Deputy Speaker Thomas Tayebwa. In his communication, he informed the House that the President had returned the Museums & Monument Bill, 2022 for some of the provisions to be reviewed. The Bill was referred to the Trade, Tourism, & Industry Committee.

The Deputy Speaker later referred Hon. Francis Zaake (MP Mityana Municipality, NUP) to the Committee on Rules, Privileges, and Discipline for disciplinary action as per rule 175 of the rules of procedure after his ‘perceived misconduct’ during this afternoon’s Plenary Sitting. Tayebwa urged Members to stop dramatising proceedings of the House. He further warned MPs against attempting to blackmail parliament. Hon. John Baptist Nambeshe the Opposition Chief Whip apologized for the mishap that happened. He said that they are just concerned about the massive abductions going on in the country, many of which are unaccounted for.

Later, Hon. Museveni William (Buwekula South, Indp.) asked the government to relax the lockdown guidelines in Mubende and Kassanda districts. He said it is affecting transportation and other socio-economic activities in the districts. He also asked that curfew be lifted to 10 pm. State Minister for Health Hon. Margaret Muhanga responded by hinting at the possibility of the government lifting the lockdown in Mubende and Kassanda by mid-December if the public continues to adhere to Ebola guidelines. She appreciated the MPs for sensitizing the public about the Ebola Outbreak.

Separately, State Minister for Higher Education, JC Muyingo said Government will soon release the list of beneficiaries of the students’ loan scheme. “The delay was because the term of service of the Board had expired. The new board has been appointed and soon the list will be released”, he said.

Later, the Minister for Presidency Hon. Milly Babalanda presented a statement on the Commemoration of World AIDS Day on 1st December 2022 in Rukungiri District under the theme: “Ending Inequalities among Adolescent girls, young women, and boys.”

Thereafter, Hon. Kamateneti Josyline (Ntugamo DWR, NRM) asked the government to budget for health workers responsible for PWDs. She said PWDs shun most HC IIIs and HC IVs and Hospitals upcountry because they lack interpreters for PWDs, especially for the blind, deaf and dumb persons.

Thereafter, Hon. Medard Ssegona presented the response from the Opposition on the action taken report from the Prime Minister, Robinah Nabbanja for the first session of the 11th Parliament. Hon. Ssegona noted that whereas Parliament had pronounced itself on issues of national importance, government had not responded to all of them. Where an attempt had been made, it still remained wanting.

Thereafter, Hon. Olanya Gilbert (Kilak South, FDC) challenged the Attorney General to explain the compensation criteria for the claimants for their animals. Hon. Okupa Elijah (Kasilo County, Indp) joined the debate asking why the compensation focused only on cows (animals) and yet lives were also lost during the war. He said the ruling was specific to compensate property and lives lost. Attorney General Kiryowa Kiwanuka  assured the House that the government valued each cow at UGX 1,050,000 and that no beneficiary was paid less than that.  The Deputy Speaker referred the report to the Committee on Legal and Parliamentary Affairs and urged the committee to provide ample time to hear complaints from the beneficiaries ascertain the facts.

Thereafter, Hon. Judith Nabakooba (Lands Minister) presented the action taken report on the status of the implementation of the resolutions of parliament on the Nakawa-Naguru land allocation 2022. She said, “Given the irregularities in the allocation of the land to the so-called investors, all titles already issued be cancelled and the entire land repossessed by government”. Minister Judith Nabakooba also said that the President had been notified to take appropriate action on ministers and technical officers who disregarded the law on the allocation of Nakawa-Naguru land. She also said that Parliament appropriates the funds that should be paid to the former sitting tenants of the Nakawa-Naguru land. However, the allocatees have binding leases with government subject to the development condition. On his part, Hon. Elijah Okupa (Kasilo County) attributed persistent challenges at Uganda Land Commission to the failure of the Ministry of Lands to table a comprehensive bill to streamline the operations of the Commission. Minister Judith Nabakooba said the ULC bill is in draft form. “Cabinet guided that all ministries with pending bills sit down and conclude the drafting of the bills. So, between now and January, we are going to process all pending bills including the ULC bill.”, she said.

Thereafter the Deputy Speaker adjourned the House to the next day Wednesday 30th November 2022 at at 2:00 pm.