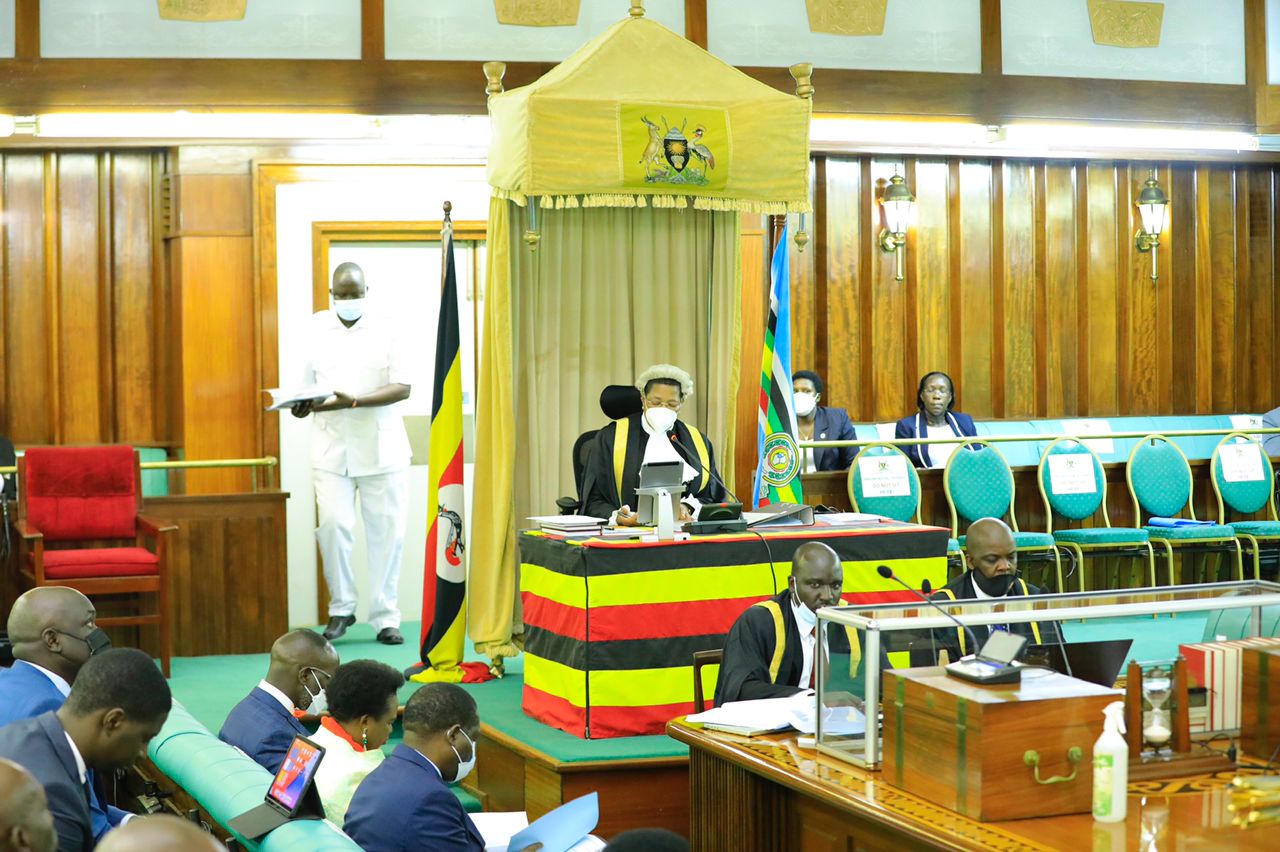 Today marked the 11th Sitting of the 2nd Meeting of the 2nd Session of the 11th Parliament, and was chaired by the Rt. Hon. Speaker Anitah Annet Among. In her communication, she informed the house that she had had a meeting with the Auditor General and his team. The Auditor General submitted reports on classified expenditures, the Parliamentary Commission, and a report of a forensic audit into Covid funds. She urged relevant accountability committees to scrutinize the audit reports submitted today by the Auditor General on Covid-19 funds and classified expenditures.

On this day a number of MPs were clad in orange scarves in commemoration of the Annual 16 days of Activism against Gender-Based Violence.

Later, Hon. John Okot (Agago North, NRM) joined other MPs from Karamoja seeking urgent government intervention to respond to issues of insecurity in the sub-region. In response, State Minister for Internal Affairs, Hon. David Muhoozi acknowledged the re-emergence of insecurity in Karamoja, which he said were residual challenges that will be addressed. On the other hand, Hon. David Zijjan (Butembe County, Indp) raised a matter of national importance regarding the plight of sugar cane and farmers in Uganda. He said, “Section 3 of the Sugar Act, 2020 establishes the sugar board which is yet to be operationalized to regulate and supervise the sugar industry.” Later, also Hon. Solomon Silwany (Bukooli Central, NRM) laid on the table the Forensic Investigation report into the Covid-19 funds released to Ministries, Departments, and Agencies for FY 2019/20, 2021/22. The Speaker referred the report to the relevant committee for scrutiny.

Later, Hon. Betty Amongi, the Minister of Gender, Labour and Social Development (MGLSD) presented a statement (attached) on the l6 Days of Activism Campaign against Gender-Based Violence (GBV). This global campaign was inaugurated in 1991 and spearheaded by the Women’s Global Leadership Institute (WGLI), a program at Rutgers University in New Jersey USA which trains women in leadership based on global good and practice.  The campaign has since grown globally and is marked by a wide range of activities organized by various stakeholders. This year 2022, marks the 31st Anniversary of the 16 Days of Activism Campaign.

The 16 Days of Activism Campaign commences on 25th November, which is the International Day for the Elimination of Violence against Women, with a National Launch which flags off various activities at national and district levels in line with the national theme and ends on 10th December, which is the Human Rights Day. This year’s Global Theme is; UNiTE! Activism to End Violence against Women and Girls”. Uganda has adopted this global theme as the National theme.

MPs wanted the 16 days of Activism Campaign launched in a village setting where gender-based violence is rampant. The Speaker asked, “Why wouldn’t we have this launch in Bukedea where the percentage of GBV is high or Nakapiripirit where girls get married at 10 years?”. To address gender-based violence, Hon. Anthony Akol (Kilak North FDC) proposed that Government first deals with the issue of poverty and access to education. Hon. He said that unless the problem of poverty was addressed, it remains hard to solve the problem of GBV in our communities. “When you look critically at the areas with high cases of GBV, they are areas that have high levels of poverty”, he said. On his part, Hon. Jonathan Ebwalu (Soroti West, Indp) called for a special fund for rural women. Hon. Komakech Christopher (Aruu County MP, Indp) blamed the high uptake of alcohol and drugs as one of the leading causes of Gender Based Violence in the Acholi region. He called upon government to address the increasing use of drugs and alcohol in areas like Acholi.

On his part, Hon. Medard Ssegona (Busiro East MP, NUP), who was representing the Leader of Opposition proposed the introduction of the Sexual Offences Bill in a bid to address the increasing cases of Gender-Based Violence in families and communities. The MP also called for increased capacity building among Police, judiciary, and Ministry of Gender. He said there was a need to invest in awareness and training on gender matters in these key government institutions.  He called upon Uganda Police to allow them to organize and participate in activities against gender-based violence in their constituencies. He also called for the establishment of GBV shelters in districts across the country where victims of GBV can be attended to and rehabilitated.