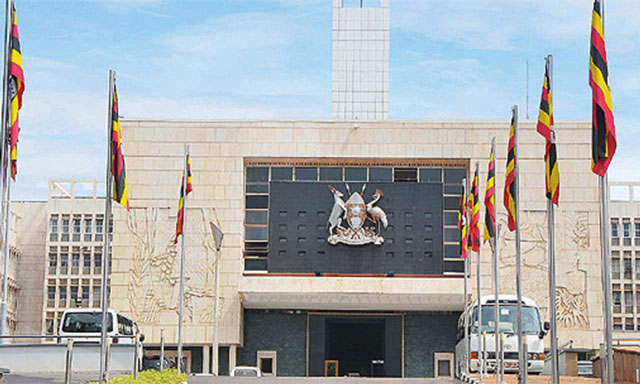 The first plenary in the Month of May 2022 was chaired by Rt. Hon. Speaker Anitah Among. The Speaker in her opening remarks said, “Today we join the rest of the world in celebrating the World Press Freedom Day. As a legislature, we have a duty to protect the freedom of the press and create an environment that is safe for Journalists to do their work. I ask all members of the fourth estate to uphold the professional values that define their trade and value the sense of responsibility to their country.”, she said. She also congratulated the medical team from Mbarara Regional Referral Hospital for successfully separating conjoined twins. “It gives us pride when such complicated surgeries can be performed in our regional hospitals”, she said.

Raising on a matter of national importance, Hon. Namanya Naboth, (MP Rubabo County, FDC) was concerned about load-shedding in Rubabo and Rukungiri district in general for 12 months now and the high cost of service fees. He asked the UEDCL through the Ministry of Energy to intervene. Hon. David Bahati Minister of State for Trade, Industry and Cooperatives (Industry) assured the member that the government was doing all it can to restore power in the area and surrounding areas. He said the area lacked a substation for power but that the government had secured funds to construct one in the next 6 months or 1 year.

Also, Hon. Mwijukye Francis (Buhweju County MP, FDC) said he felt threatened and scared to return home because the coffee farmers in his area were demanding answers regarding the controversial coffee agreement. He said they have even threatened to cut down the coffee trees. He asked the government to find solutions to the matter so as to save MPs who came from coffee-growing areas. The Speaker said the matter was referred to the Committee of Trade and that they will be coming up with a report.

The object of the bill is to impose local content obligations on a person using public money or utilizing Uganda’s natural resources or carrying on an activity requiring a license; to prioritize Ugandan citizens, Ugandan and resident companies in public procurement to ensure skills and technology transfer to Ugandans; to provide for the development of local content plans; and, to provide for the supervision, coordination, monitoring and implementation of local content in Uganda. The Bill was referred to the Committee of Finance for scrutiny.

Also later, Hon. Muwanga Kivumbi, (Butambala County MP, NUP) tabled the response of the Leader of the Opposition of the draft annual budget estimates for FY 2022/23. He asked that Parliament looks into amending rules for when a leader of Opposition can respond to annual budget to allow for the ability to provide alternatives to the budget proposal.

Next on the Order Paper was the laying of Papers. The Committee of Education tabled the report on the Ministerial Policy Statements and Budget Estimates for the Education and Sub-programme for FY 2022/23. The report was referred to the Committee of Budget for reconciliation and harmonization.

The House then moved to process the Fisheries and Aquaculture Bill, 2021. The object of the bill was to consolidate and reform the law relating to the management of fisheries, fisheries products, and aquaculture. The current Fisheries Act.Cap. l97 emanates from the 1951 Fisheries Ordinance which was later re-enacted as the Fish and the Crocodile Act in 1964.

Presenting the Agriculture Committee Report on the Bill, Chairperson Hon. Janet Okori Moe said the European Union remained the leading market for Uganda’s fish. “This has been so because Uganda managed to meet the EU quality assurance requirements”, she said. She added that the Government of Uganda had set a target of increasing capture fisheries and aquaculture production to 1.7 million tonnes annually by 2030 as a measure of contributing to food security, nutrition, and economic growth.

Regarding the management and governance of the fisheries sector, the committee recommended that the personnel in charge of the enforcement of the law under the fisheries sector should be equipped with the requisite knowledge in fisheries and aquaculture. The training should be done by the Uganda Police Force since the police are charged with keeping law and order and detecting crime. It also said that the offences under the law should be strictly tried within their respective magisterial jurisdiction.

The Committee also recommended that some fishing licenses like movement, bicycle, & motorcycle permits, among others should be decentralized to local governments to ease accessibility. This they said would be cost-effective because districts/local governments were near the communities. Regarding the type of fish and net sizes for capture fisheries, the Committee noted that there are different types of capture fisheries in the waters and recommended that the Minister should ensure that the regulations should ensure that all fish species are regulated.

The Speaker under Rule 130(3) of the Rules of Procedure, opened a brief debate on the report of the Committee of Agriculture. However, Hon. Cecilia Ogwal (DWR, Dokolo, FDC) suggested that the House moves straight to considering the Fisheries and Aquaculture Bill, 2021 at the committee level instead of having a debate. As such, the House adopted the Report of the Committee on Agriculture, Animal Industry and Fisheries presented by Chairperson Janet Okori Moe. The House then transformed into a Committee of the Whole House to scrutinise and debate the bill clause by clause.

After extensive surgery and amendment to the bill, the House passed the Fisheries and Aquaculture Bill, 2021. Later, the Speaker Anitah Among told the House that they will no longer be handling Bills with more than 50% of the amendments. “I would like to warn you, people. You cannot have a Bill with more than 100 amendments. Then what happened to the other Act?”, she asked. If the Bill requires repealing, then we go straight for that rather than amending 80% of the Bill. We shall not receive any bill like this again”, she said.